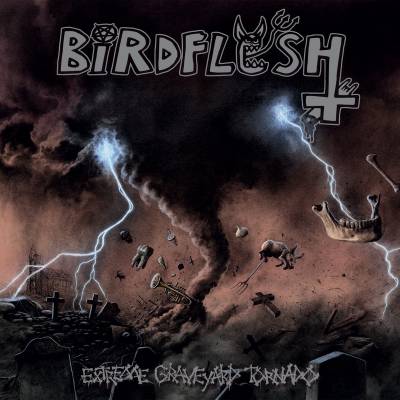 For those who have not come across Birdflesh before, they are a massively entertaining grind band from Växjö Sweden, whose members have or do play in some of Sweden’s best underground bands. However, don’t be fooled, Birdflesh is in no way a side project, it is very much a real band. Having formed in the early 90’s they have been regularly releasing music and bringing their brand of demented grind awesomeness to stages across the world.

Comprised of Smattro Ansjovis, Panda Flamenco and Billy Bob Banjovich. Birdflesh is one grind trio that have a huge sense of fun about them. However, if you believe that somehow means they are a joke band, you would be very much mistaken. Rather, they are an extremely potent musical force who not only understand the grind genre, but metal as a whole. When I was a kid we used to joke that Swedes must be taught metal at school based on that countries musical output, well if that were true then trust me Birdflesh would’ve gotten straight A’s.

So now the history lesson is over, I will turn to their latest release Extreme Graveyard Tornado. Containing 24 tracks in a mere 27 minutes, it is a furious listen. Although, as ever the puns and comedic elements are never that far away. First song Towards Insanity starts off as fast and furious full on grind, suddenly this is replaced with a slower stomp section which is introduced with some guitar dive bombs and a super cool harmonic trick (sorry my inner guitar geek has appeared), the mid-section is super groovy and I think will work live really well. However, before it outstays its welcome the accelerator is once again pulled, and we are back into break neck speed territory. At a mere 2 minutes long it’s not only one of the longest songs on the album it’s also fucking awesome. And that is true of the entire album, its packed full of surprises and musical puns.

The production is really clear and effective. The drums being a particular highlight for me, although that is because they are really punky and don’t overly rely on technicality, it’s a style that I love. Overall the level of song craft and musicianship maintains high, with heaps of fun guitar work. There are musical nods to the likes of SOD, Morbid Angel, Macabre and many others as well. I could list all that I noticed, but that would only spoil the surprise.

Another highlight for me is the song Home Of The Grave, the opening riff is a bizarre fusion of the coldest Nordic black metal style trem picked riff you could picture and something you’d expect from a pop punk album, imagine Mayhem having a jam with Greenday, it really is that twisted. This song also has a classic Gothenburg style outro riff. The start of Mouth of Gore has a cheeky nod to Morbid Angel’s Day of Suffering, whilst Grind Band even manages to squeeze in a sax/clarinet or Kazoo solo (read that as I can’t tell what it was but its either windy or horny haha).

It’s clear with song titles such as Crazy Train Decapitation, Milkshake is Nice, Guacamolestation of The Tacorpse, Almost Aggression and Garlic Man that this record may not work for those most serious of metal heads. But for the rest of us who sometimes like to just crack open a beer and have a good time then this is the perfect soundtrack. Most of all though, it’s obvious that Birdflesh understands Metal’s most important and secret unwritten rule, and that is Metal is and always will be ……….. 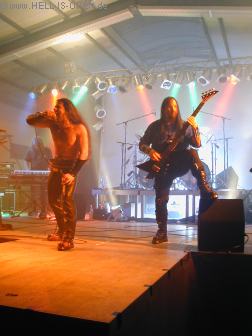