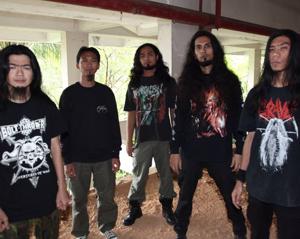 Death metal from Malaysia is something special. If a band has 20 releases since 2009 and with their Bolt Thrower style they manage that the crowd goes crazy on every gig, then it is time to do an interview with that band!

What connects World War II, communism and the Japanese invasion with the death metal band Humiliation from Malaysia? How did the session drummer die and which bands influence the members most? If you are interested, then read our interview that we did with the band at the Protzen Open Air 2018 in Germany.

HIO-Pit: You sent us a copy of your first EP “Face the Disaster” in 2009 and we were really surprised about this Bolt Thrower sounding stuff. What has changed since that release e.g. style?

Humiliation - Mudon: In general, it is still the same. The reason why we do this is actually for our love of the old school death metal.
HIO-Pit: As we mentioned before, your style and sound is very similar to Bolt Thrower. Have you analyzed the Bolt Thrower style and said “Oh, that’s cool, I have to play the drums like this and the bass like this..” or did you create the Humiliation sound in a different way?

Humiliation - Mudon: I think, initially, yes we are more into Bolt Thrower and the other old school bands like Benediction and Asphyx. We set rules for Humiliation, we will never play cover songs, and we will write our own songs but in the style of old school death metal especially Bolt Thrower, Benediction, Asphyx etc.

Humiliation - Bear-Bee: For victory.
HIO-Pit: You played yesterday a great show at Protzen Open Air. How do you think or feel about the German audience compared to for example Malaysians or other European countries?

Humiliation - Asraf: We always choose Germany as the best place to play as you have the best crowds and we get a lot of support here. In Malaysia, we also have good support, but the greatest support is here. On every tour it is always the same, it never disappoints. This is why we keep doing this.
HIO-Pit: When you play shows in Malaysia, are there also female fans coming?

Humiliation: (All are nodding) Yes, there are also women. They are wearing a Hidschab.
Hio-Pit: Some questions about your country, Malaysia. How is the metal scene there? Is it good or is it much smaller than in other parts of the world, for example Europe?

HIO-Pit: Some questions about your country, Malaysia. How is the metal scene there? Is it good or is it much smaller than in other parts of the world, for example Europe?
Humiliation - Bear-Bee: For a small country, it is not that big and not that small. We are quite a small country compared to Thailand or Indonesia, for selected gigs, we can have up to 500 people in one venue, which is very good. I would say sometime if there are commercial rock and metal bands come you can have also over about 2000 people it is not that small and not that big.
And then we have the annual festival Kuala Lumpur metal camp (KL Metalcamp). Destruction played there before also Municipal Waste, Hate Eternal and D.R.I.. We also have the MAMAT Fest, where we invited all the bands from Japan, Indonesia, Singapore and have a crowd around 350 to 400 people.
HIO-Pit: I know that in some Asian countries metal and punk fans are really under pressure, to cut their hair and so on. Is it the same in Malaysia or can you look however you please?

Humiliation - Bear-Bee: It depends on the job. For example if you work for the government or something like that then you are not able to have long hair, if you work for a private company then it is not a problem how you have your hair.
Humiliation - Mudon: I work for an oil and gas company so I’ve to abide with the official rule. I’m the only one with short hair in the band.
HIO-Pit: I think you can’t live on your Humiliation income, do you also have to work?

Humiliation - Bear-Bee: I’m working in a factory. Bassman Aimar is a cook, guitarplayer Asraf is doing t-shirt printing, guitarplayer Amir Faisal is doing insurances business and drummer Mudon is working for an oil and gas company.
HIO-Pit: Your lyrics are almost totally about war, war machines and so on. Why is this? Is it because you feel that it fits the metal style or is it because you have an interest in war?

Humiliation - Bear-Bee: We try to spread the history of our country and the lyrics are about the time from world war II until the end of the communist area in the 70’s. In this period Japan invaded Malaysia and the British rule ended. So we have a lot of stories to tell from this period.
HIO-Pit: How is the black metal scene in Malaysia, is there any?

Humiliation - Bear-Bee: There is a black metal scene but there is a bad propaganda from the mass media that black metal is “worshipping Satan”…. If we have a black metal gig, somebody will call the police, they will come and stop the gig, and they bring all metal heads to the police station to the urine drug test. Everybody who wears a black shirt, it doesn’t matter if you wear a death metal or thrash metal shirt. They will label you as a black metal fan and has to do take the test.
HIO-Pit: What was your biggest gig ever?

Humiliation - Mudon: Actually, it was our session drummer. I was at that time not able to tour with the band, so we decided to ask our friend to play this tour. It was an asthma attack and it was very sudden. In around one week, he lost consciousness and died.
HIO-Pit: We come to end of the interview and it would be cool when every member tells us what your favorite bands are.

HIO-Pit: Thank you for the interview, safe journey home and see you in October when you are back for a new tour in Germany! 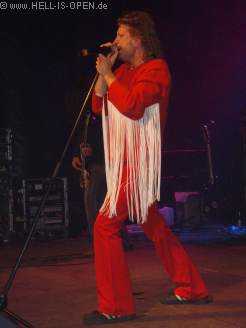