Riccardo: Hey. We are doing great. It’s been a hard Year but we are very happy that the Album is out for everyone to hear.
HIO-Martin: The new Album, "Of Loss and Grief", is released right now. What are the next Steps for Aphonic Threnody?

Riccardo: The next Steps are we are recording for a Split early next Year and working on the next Aphonic Threnody Album.
We are also adding a live Drummer to the Album and Split which will be fantastic.
HIO-Martin: Why the Name Aphonic Threnody?

Riccardo: The term Aphonic means to be “Without Audible sound” and Threnody is from the Greek meaning “Threnoidia” which means “an ode, song, or speech of lamentation, especially for the dead”.
It just seemed to fit into what my thought Process was.
HIO-Martin: Why Funeral Doom?

Riccardo: At the time I was mainly in the Mindset of writing Traditional Doom Metal music. Funeral Doom has given me so much Room to explore Melodies and Emotions and I really enjoy the Challenges it brings.
The Songs themselves are long and trying to keep the Listener interested in them is really rewarding to achieve. You are able to create a huge Vacuum of Sound that can engulf the Listener.
HIO-Martin: Why do you started to play Music, and when?

Riccardo: I started in my early Twenties but did not get into the Genre much later. Its means a lot to me personally to get the Message across to People so they can understand what is around us every Day.
Life experiences and hardships happen every Day so to try conveying that through Music is great.
HIO-Martin: After an Album is released, do you hear it or is this a closed Chapter? Do you listen to your old Stuff?

Riccardo: I often give it a Break because we listen to it so much leading up to the Release. It’s great to revisit the Music to see how it sounds again and what we can do to make it different and better the next Time around. We are never satisfied.
HIO-Martin: Any recommend Bands that we should hear?

Riccardo: I like bands like Alunah, Slow, Arche and Below.
HIO-Martin: :What Music do you hear beside AT?

Riccardo: I actually listen to different Styles of Music as well as different Genres. Old Bands and I try to seek out new Bands and support them.
HIO-Martin: You made a few Splitreleases. Are these Splitpartners chosen by you or from the Label?
Are you still in Contact with the Splitbands? Do you have an Eye on it what they release?

Riccardo: Sometimes we have Labels contact us but we mainly contact Bands to see if they are interested. I always listen to the Bands new Music and support them. Most Bands yes we keep in contact with them.
HIO-Martin: You write a new Song. What comes first: the Lyrics or the Music? Or are both developed Hand in Hand?

Riccardo: Music always comes first. As I am the main Writer of the Music this becomes the first Point of Structure. We then add a few Elements to get a feel of the Song.
Once we have a few Songs like this we then can get a good Concept of the Music. This will then give us an Indication of lyrical Themes etc.
HIO-Martin: Is there any Way to see Aphonic Threnody on a Livestage? If it would be possible in the Future, are you ready to bring AT on a Stage? Or is it a Studio-only Band?

Riccardo: We are adding a live Drummer to the band and are working on a Plan to do some Shows in the Future. Hopefully we will get to the Stage soon.
HIO-Martin: Any last words?

Riccardo: Thanks for the Chance of this Interview.
We have plenty of Music coming out so keep checking our Facebook Page for Updates. Thanks for all your Support as always.
Kind Regards, Riccardo 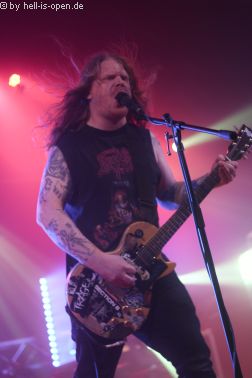