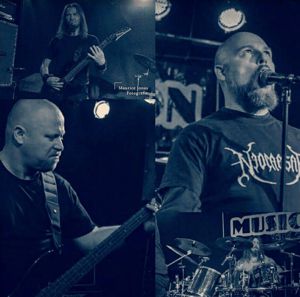 Back in 2013 I got stoked as Neocaesar appeared on the map. The special thing about this band is that it includes former Sinister Members and gave fans the hope for a continuation of the old school Sinister sound. After the release of the CD I ordered it directly from the band and I took the chance to ask directly for an interview with Bart van Wallenberg (the man responsible to Sinister’s guitar trademark sound back in the past). We talked about Neocaesar, Tour activities and much more. Please read for yourself.
HIO-Sascha: Hello Bart thanks for taking your time for this interview. How are you and are the things going on your end?

Bart: Actually not at all. After playing Sinister for 10 years I was done with doing the same thing every time again. Since then I have done a lot of projects which I enjoyed as much as playing in Sinister, I just chose not to do anything big. I have played music in various styles on different occasions with my friends and with new friends, which was really satisfying. I learnt a lot in both the musical and personal area. We have played punkrock, death metal, a couple of (non-metal) cover projects, acoustic sets and grind core.
HIO-Sascha: How do fans react to Neocaesar? Are they seeing the band as an alternative Sinister line up?

Bart: Some do, some don’t. It’s up to everybody’s own perception how they like to see the band. I like to think we have our own style. Obviously we used our Sinister-past to gather some attention for NeoCaesar.
HIO-Sascha: I saw a live video of Neocaesar recently on YouTube. Do you play Sinister songs live or is Neocaesar a completely own entity who wants to stand for itself and not to be compared with Sinister?

Bart: We never played any Sinister songs, it is not our intention to be the continuation of the Sinister from the nineties. When Mike and me started, we collected out a couple of songs to determine which style we wanted to write. It included bands like Testament and Dark Angel. The first couple of riffs we wrote were a little in that direction but soon we ended up writing the riffs that come more naturally for us.
HIO-Sascha: Who got the idea to name the band Neocaesar and what does the name stand for?

Bart: Mike got the name. I think it is a powerful name and most of all, a self-explaining name.
HIO-Sascha: In another interview I read once that there was a planned reunion with Aad but it never came to be. Why didn’t the reunion came to be?

Bart: It was just one of those nights where we partied with a lot of beer and liquor. It was just a wild idea, never really meant to become reality.
HIO-Sascha: The album was released recently and how is it received?

Bart: Very well. It is mostly ordered by people who are familiar with our work back in the nineties who want to hear what we spit out in the present. All we wanted to do was to create an album with the metal that we stand for and provide the opportunity to order the album.
HIO-Sascha: It's interesting to see the release happened without a label in the background. A lot of respect for this decision since this shows a lot of passion towards the music and the fans. What was the reason to finance it by yourself?

Bart: We had some experience with recording by ourselves and decided that it would be best if we purchased all the stuff that’s needed to do a full production. So that we have no studio time-limits and can take full control and all the time we need to get the result we like. As our goals were as explained in the previous questions’ answer, we want to sell our album for a small price so this is the road we chose.
HIO-Sascha: Neocaesar is also about to play very soon a few concert in the Netherlands. Is anything tour related planned in the future outside of the Netherlands?

Bart: Not for the moment. We are looking for shows though, we want to play.
HIO-Sascha: By what does Neocaesar and especially you get inspired to write the music for the band?

Bart: Strange enough there’s no special source of inspiration. When I pick up my guitar, usually I have some riffs just come rolling out of my fingers. Some riffs are good to stay, some are as welcome as my morning breath. My roots though are in the late 80’s thrash and death metal like Kreator, Slayer, Incubus, Dark Angel, Death, Testament etc etc. I guess that’s where the base of all my riffs come from.
HIO-Sascha: Thanks once more for the interview. The last words are yours?

Bart: Thanks for giving us the opportunity to do this interview and expending our network. Please mention that if anybody is interested to order the album, they can send an email to neoceasar.merchandise[@}gmail.com or order it through www.nuclearblast.de. More information is available on our Facebook account.
Website: https://www.facebook.com/Neocaesar.official 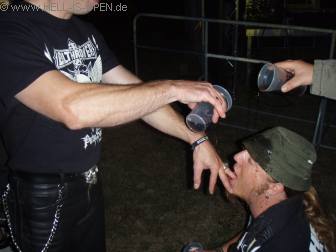