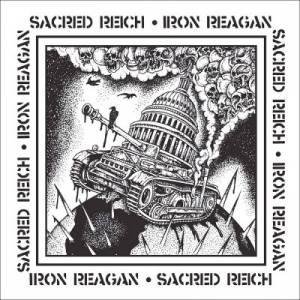 This limited 7” split brings together the old (Sacred Reich) and the newish (Iron Reagan) for 4 minutes of thrash worship. The question is of course will the legends be left behind by the young up starts or will they show that things really do get better with age? I’ll reveal my views on that in a bit.

Whilst the origins of thrash can be debated for hours upon end, was Queens “Stone Cold Crazy” the first thrash song ever written or was it a young Leather Charm’s “Hit The Lights”? The answer is probably neither of the above but we can agree that Thrash was the perfect collision of Hardcore/Punk and NWOBHM. A genre that went on to spew forth some of the biggest metal bands of all time as well as opening the gates to all of the more extreme genres that followed. Not to mention its great drinking music!!!!!

Sacred Reich’s place within the Thrash scene is without question, gaining much attention with their first release “Ignorance” and its follow up EP and my personal favourite “Surf Nicaragua” they have well and truly cemented their place in Thrash history. However whilst they have been active on the live scene they have not released an album since 1996’s “Heal”, that all changes this year with their new album “Awakening” which is due for release later this year. The album also sees the return of Dave McClain who rejoined the band in 2018 after his departure from Machine Head.

“Don’t Do It Donnie” is therefore Sacred Reich’s first new music in 23 years. At sub two minutes there is not much time to fuck about and as such the song is a straight ahead up tempo slab of cross over thrash with a fun break down section. The vocals retain that classic feel of the bands earlier material. The song is a little to punky to me and I was never the biggest fan of that style of thrash. However it is a catchy song and the production is really good. The drums and bass in particular sound great and lock together to create a really tight and effective rhythm section. It’s effective and fans of the style will really like this I feel. I’m looking forward to the full length later in the year.

Which brings me to Iron Reagan’s contribution “They Scream”. I have to confess that I have had little exposure to this band outside of seeing them at a festival somewhere and the split release they did with Exhumed some years back. Again the song is short and to the point in that it is sub 2 minutes long. However they manage to cram a lot into it. The opening mosh section gives way to an up tempo d-beat gallop which then leads to a heavy chorus before a very bluesy solo and another run through the chorus before a quick outdo and then its done. The production sounds really modern whilst maintaining that old school feel, no easy feat as I can testify from my own bands efforts. I really dig this song and I think that its time I check out some more from this band.

So there you have it 4 minutes of straight ahead fast and furious punky cross over thrash, this is a million miles away from bands like Slayer, Destruction etc but then it was always going to be. If you are a fan of this style then I think you will get a lot of pleasure from it. Plus let's not forget split releases are always super cool.


Song tip: “Don’t Do It Donnie” and “They Scream” – erm obviously

1. SACRED REICH: Don’t Do It Donnie
2. IRON REAGAN: They Scream 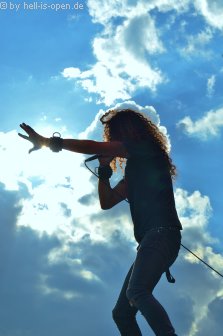